For Safety and Reliability, Water is the Natural Choice

Roughly 71 percent of the Earth’s surface is covered in water. Unlike refrigerant, it’s non-toxic and presents no threat of ozone depletion. Conveniently, water also has a very high specific heat; the ability to carry thermal energy. This makes it the perfect, natural choice for use in heating and cooling applications.

Hydronic systems reduce - either in large part or entirely - the need for refrigerants inside a building's HVAC distribution system. This has major safety and efficiency benefits.

The refrigerant used in appliances has changed recently, due to its potential depletion of the ozone layer, and for safety reasons there have been limitations on the volume of refrigerant in equipment inside a building for decades. While the refrigerant used in modern heating and air conditioning systems is less hazardous than its predecessors, it must still be handled carefully and its volumes monitored within a system.

The fact is, when space cooling is needed, refrigerant is almost always necessary. Reducing total refrigerant volume inside the occupied portion of a building, making sure that it’s properly contained, and handling it with respect are of key importance. This is nearly impossible with VRF (Variable Refrigerant Flow) distribution systems, which typically contain more refrigerant within the occupied space than any other type of HVAC system, not to mention a high number of field-installed connections throughout the system.

The following paragraph from a DuPont Material Safety Data Sheet (MSDS), required by OSHA on all chemicals, is typical for refrigerant:
“Misuse or intentional inhalation abuse may lead to death without warning.  Vapors are heavier than air and can cause suffocation by reducing oxygen available for breathing.  Rapid evaporation of the liquid may cause frostbite.”

While safety codes exist to limit the amount of refrigerant in a building, the calculations in the codes rely on room volume to arrive at an approved, “safe” refrigerant charge. The problem is that although ceiling height isn’t relevant because refrigerant settles to the floor, the calculations used allow for the entire volume of the room to be used, even if the ceiling is 12 feet in height.

What’s important is the height at which occupants breathe, whether standing, sitting, sleeping or lying on the floor (as instructed to do in an emergency or in the case of an injury). This is why baseboard refrigerant leak detectors are required with the installation of VRF systems. This, however, is not the case with hydronic systems, because water-based systems use refrigerant in an inherently safer manner.

Hydronics = safer use of refrigerant

Heating-only hydronic systems typically operate without any refrigerant at all. When cooling is needed, refrigerant is almost always necessary, at least to some degree.

But there’s a big difference between refrigerant use a in a hydronic system and in a VRF system. On average, hydronic systems use 66 to 75 percent less refrigerant in order to supply the same cooling capacity. The graph below compares the volume of refrigerant required by four similarly-sized HVAC systems. 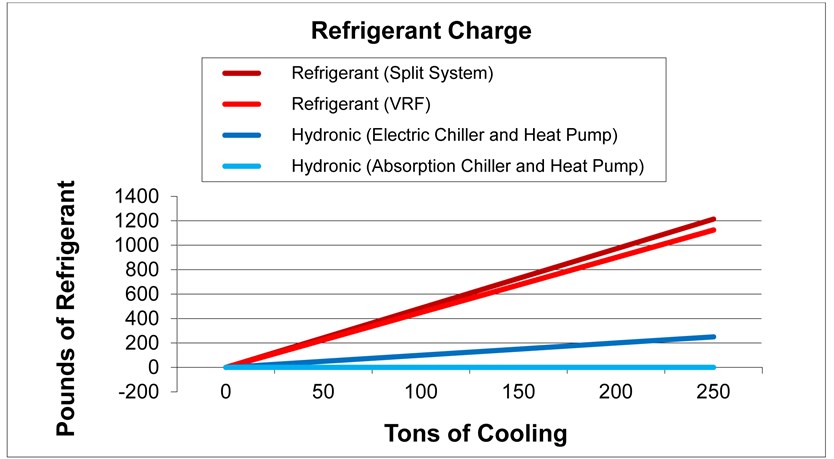 Another key consideration is whether the refrigerant circuit is factory sealed, tested and certified, or if it was field-installed. The latter poses a much greater risk of leakage.

Most hydronic systems incorporate only factory-sealed circuits, which are assembled in a controlled environment and are subject to rigorous standards and testing procedures. On the contrary, VRF systems employ both factory-sealed circuits and extensive field-installed circuits throughout the occupied space. This could include anywhere from a dozen to hundreds of hand-brazed connections as copper refrigerant lines are run through ceilings and walls. Human error becomes a major safety concern.

Refrigerant leaks are like helium leaking from a balloon, you can’t see it. In fact, in factories refrigerant circuits are filled with helium and tested with what is called a helium mass spectrometer, then refrigerant leak detectors are used with the finished unit. Field leaks, especially in the concealed piping associated with the installation of a typical VRF system, are almost impossible to find.

Not only is the likelihood of a refrigerant leak far smaller in a hydronic system, but in such a case, it’s less likely that the gas would find its way into an occupied space. In most hydronic systems, the refrigerant is concentrated in the mechanical room, away from building occupants.

In addition, incorporating HVAC components that are exposed to occupied spaces is optional with hydronic system. When VRF systems are installed, evaporator units are generally hung on the wall or installed in the ceiling, and refrigerant lines are in the ceiling and corridors, increasing the likelihood of concealed damage, especially after occupied.

The Earth and your body use water to regulate temperature, why should your building be any different?

For more information, please contact the Radiant Professionals Alliance and the Hydronics Industry Alliance at (877) 427-6601 or info@hia-c.org