The 45th WorldSkills competition drew to a close Monday, with 56 skills competitions across the expansive Kazan Expo site completing their four-day Test Projects, which are examinations of technical skill and craft designed to demonstrate world-class industry standards of excellence.

WorldSkills competitions are constantly evolving to reflect the changing world. WorldSkills Kazan 2019 will see medals awarded in several new official skills, while entirely new event categories including FutureSkills and WorldSkills Juniors have also been added to the roster for this year’s event in Russia. Many other skill competitions — including Plumbing — have been part of the WorldSkills portfolio since the very first contests of the 1950s.

This nearly 70-year evolution of the WorldSkills Plumbing competition — today officially presented on the WorldSkills international competition stage as Plumbing and Heating — took a significant step forward on the final day of WorldSkills Kazan 2019. For the first time ever, a collaborative and non-assessed Team Project was introduced for the final day of the Plumbing and Heating competition schedule. In this activity, all Plumbing and Heating competitors and experts — who, combined, represented a total of 31 different countries — worked side by side to repurpose equipment and materials used in the main Test Project of days one to three, and assembled three new toilet and washroom plumbing systems that will be donated to and installed at a local children’s home later this week.

Participants provided valuable feedback at the end of the Team Project, which was designed to allow for hands-on teamwork, communication and skills exchange that are otherwise difficult for competitors to do in the traditional four-day competition structure. 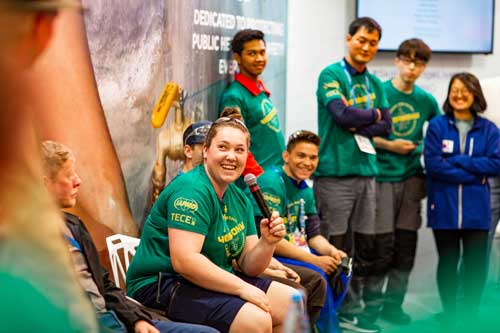 “This has been like a white flag; for us all to work together on the final day of competition”, said Lauren Phillips, the Plumbing and Heating competitor from New Zealand. “It would be cool to incorporate what we are doing today, into the actual competition. To make something, that goes somewhere! Individually, or as a group. But it is fun to work together and to see the different ways people work. Even if we can’t all speak the same language, we can all read the same plan and get it done!”

“A medal is not the main priority, it is about the total experience,” added Swedish competitor Anton Hasenstrauch. “It is getting to know everyone that is the best part, I think.”

“In the future, if we were to have to chance to go and install them [toilet and washroom assemblies] in the orphanage, after the competition? Then, 100% — I would love to do that,” added Thomas Thomas, a competitor from WorldSkills UK.

Follow updates from the installation project at the Derbyshkinskiy Orphanage in Kazan via IAPMO social media and our special project hashtag, #SkillsChangeLives.